Anish has given me a surprise today. He wrote a note in his school that read “Dear Dad, Happy Father’s Day! Thank you for taking care of me. You are the best. I love you!
Love, Anish”

Ha… As a father what else you want than the pure unconditional love your child showers on you.

Do you see this lady spinning in anti-clock/clock (right or left) wise?

If you see this lady spinning in clock wise, then you are using your right side of the brain. If you notice anti-clock wise spinning you are using your left side of the brain. Most people should be able to switch between right and left brains pretty easily, some times with the help of heavenly C2H5OH . If you cannot, try concentrating on the hip of the lady and you should be able to spin her in other way.

If you always see the lady spinning only in one direction, then you are using only one side of the brain all the time. My suggestion, try a psychologist! or refer to the following chart to figure out your personality. 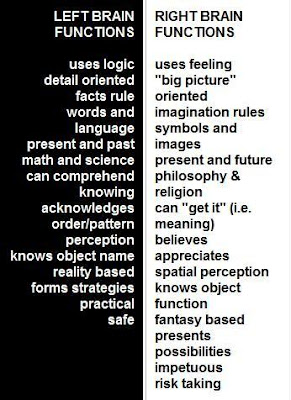 Desktop Linux has been around for a while now. Ubuntu was touted as the challenger for windows dominance for a long time. However, Presto might potentially be the David that slays the Goliath (MS-Windows).

Last night I downloaded and installed Presto from Xandros. It is an EeePC or NetBook kind of OS for the systems that already has windows installed. It is meant to be used as an supplement OS on low powered computers and

Requires an existing windows xp installation, not a standalone OS, requires windows already installed in the computer. A simple window shows all the installed applications and a link to appstore that has other applications, commercial and free, that you can install. Installation is snap, without needing to download and running installation. Click on install and Presto downloads it and installs it for you. Uninstallation is as simple as right clicking on the program and select remove.

It addresses the target market very well.
For quick browsing, not so savvy computer users (elderly, kids)
No commmand line interface
Graphics resolutions is very limited
First tries to connect to LAN before trying to connect wireless. Wastes few more seconds to connect to wireless
Window switching is confusing.
Impressively simple user interface for anyone new to computers to use.
No plugins to download in firefox, it comes with flash player so that you can immediatly start using youtube and other video sharing websites. IN summary any website that will work with Firefox will be fine, other websites that require windows may not be accessible.
No minimize button in any windows…

For advanced users…alt-ctl-t will bring up the console.

Is it worth $20? I would think yes, it can make your mom happy and it will make that old laptop in the closet you paid $900 usable again. I was thinking of buying a netbook, spend $300. Instead spend $20 and make that laptop usable again.

Tips 1: Use the “Windows User” directory to store important files.

Minimalistic Battery Indicator showed that the battery has 3 min of juice left in it.

Boot into Windows XP
Click on Start->Run
type “msconfig”
this will launch “System Configuration Utility”
Select “BOOT.INI” tab
Select “C:\grldr.mbr=”Xandros Presto”
Notice “Set as Default” button highlighted. Click on it to make the Presto the default boot.
If needed change the “Timeout” from default 30 seconds to 10 seconds. This will speed up the overall booting
Click “OK”.
Restart the system.

Does it consume less power than full fledged OS?

Though cloud computing has been around in different forms for a long time it became an “in thing” in the technology space recently. Last year, I was introduced to this concept by the excellent book by Nick Carr – The Big Switch. Frankly, I read the book with little interest. The arguments were compelling (ex.equating computing utilities to electric utilities). However, I had my own doubts about the whole notion of utility computing. One of the first problem was the issue of billing. How does the cloud computing providers bill their customers? How well this mechanism will work? The other issue was the huge bandwidth required to make this model work. As the time passed, I noticed the momentum around cloud computing was picking up speed and approaching break neck speeds. It seems now that there is no stopping of this phenomenon. There are big names (Amazon EC2&S3, Google’s AppEngine, Microsoft Azure platform) throwing their weight behind this notion. It appears more real now than a year before.

In addition, every tech company on earth claims to be cloud compatible, be it a company that produces rackable servers, or the Gigabit switching company that garnered high profile Cisco VP as the CEO.

The idea of moving the data center from in-house to out-sourced model creates many confusing terms such as IAAS(Infrastructure As A Service), SAAS(Software As A Service), PAAS (Platform As A Service), Cloud Storage, Cloud/Utility Computing, private cloud, public cloud… the list goes on. ( I will try to instill some sanity to this insanity in subsequent posts).

Is this all hype? Is this another version of ASP model everyone was gungho about during the first internet bubble? With the latest fad, Web 2.0, companies going belly up the stark realities of a bubble is not very comforting for any one watching the tech industry.

However, this time around there are signs that cloud computing is going to stick around and provide real, tangible benefits. I’m especially hopeful of the promised benefits of cloud computing, such as energy savings, rapid ramp up of resources and pay-what-you-use (utility computing) model. On top of this, I am hoping, that the new found love for netbooks is going to accelerate the adoption of cloud computing in enterprises.

The biggest challenges for wide adaption of cloud computing will come in the form of network bandwidth availability, data security(in transit and in storage) and management. Nevertheless, as time passes, hopefully, the availability of bandwidth will increase and security concerns will be a thing of the past. With the economy in doldrums and tech industry searching for the next big thing, cloud computing might be one of the saviors which might rescue the tech industry from the slump.

Well… there are signs of rain, will it be enough to reduce the impact of drought?

Saravana “SK” Krishnamurthy is VP of product management at MariaDB. A Silicon Valley citizen for quarter of a century. His passion is to explain complex ideas to "muggles" without horrid and unnecessary details.